Taken from the brochure "Historic Tour of Leclaire Village" published by the Edwardsville Economic Development Commission & Edwardsville Historic Preservation Commission.
After the Civil War, workers flocked to factory jobs in the cities, filled with hope for a better life. But optimism soon faded. They toiled long, grueling hours for petty wages and, with their families, crowded into shabby, unhealthy tenements - the only housing affordable for most. Those who complained about poor working conditions or low wages were fired. Attempts to strengthen existing unions were crushed by management. Strikes erupted, quickly turning bloody, and common people lived in a climate of poverty and fear.

As an arbitrator in an 1886 railroad strike, N.O. Nelson was directly confronted with - and repelled by - the callous attitude of management toward workers. The exploitation he witnessed and the violence sparked by the strike stirred him to seek a remedy to the capital/labor conflict which he could implement in his own company.

About this time, Sedley Taylor's book on profit sharing, Between Labor and Capital, suggested a solution to Nelson, and he soon announced his own profit sharing plan to employees. He also visited a number of industrial villages in New England and' Europe and, by 1888, had determined to relocate N.O. Nelson Manufacturing Company to a rural area. Around the factory, he would construct his own model village.

Drawing on earlier examples of the cooperative movement and profit sharing, he pursued what he saw as a middle ground between capitalism and socialism. His intent was to create a total environment which would foster contentment for those who lived there. The name for his enterprise, Leclaire, was chosen by the workers and came from Taylor's account of the house of Edmund Leclaire in Paris, France, one of the pioneering experiments in profit sharing.

By 1890, Nelson had located a site he thought suitable for his factory and village on the outskirts of Edwardsville, Illinois. Seeing the economic potential of Nelson's plan, Edwardsville businessmen and residents enthusiastically pledged $24,400 in cash subscriptions and land contributions to further the project. The land would be turned over to Nelson as certain phases of the development were completed.

The 150.5 acres ultimately secured by Nelson was fairly level, favorable for plant and residential construction. Tracks abutting the factory grounds provided access to several major railroad lines. A nearby coal mine supplied fuel, and a sizable pond provided both water for the plant's boilers and recreational opportunities. It was ideal.

Nelson envisioned the residents of Leclaire leading steady, balanced life - a rational life. At the center of such a life, he believed, is work. It is not surprising, then, that he placed great importance on the environment in which men would perform their daily labors. A.E. Cameron, the prominent St. Louis architect hired by Nelson, designed a remarkable manufacturing facility which stood in marked contrast to other factories of the time. It provided exemplary working conditions.

The single-story brick buildings were spacious and each housed a separate manufacturing function. Skylights topped the buildings, and the walls were lined with large, arched windows, which flooded the work space with natural light and opened to admit fresh air. All buildings were equipped with electrical lighting, a sprinkler system for fire protection, and ice water for the men.

In 1894, journalist Nellie Bly would write after a visit to LeClaire, "As I walked through the factories, I looked at the men. It is generally easy to judge a man's condition by his face ... the workmen in the LeClaire factories were working away as if work was a pleasure."

Nelson believed that man draws inspiration from aesthetic beauty, especially in his surroundings. As he turned to development of areas beyond the factory, he sought the talents of Julius Pitzman, the St. Louis city surveyor and civil engineer who oversaw the development of Forest Park in St. Louis.

The first residential area was laid out in a pleasing, curvilinear design and the streets lined with trees. Inspired by cities in Europe, Pitzman's plan restricted land use in the area to residences and schools. Lots were to be not less than 15,000 sq. ft., and a thirty-foot setback was required to enhance the area's attractiveness. Unfortunately, after 1900, lot sizes were reduced and new streets laid out on a grid system. Fittingly, street names reflect Nelson's ideological inspirations. For example:

Jefferson: Thomas Jefferson, author of the Declaration of Independence and advocate of public education.

Ruskin: John Ruskin, English writer, art critic and social reformer who rebelled against the aesthetically and socially debasing effects of the Industrial Revolution.

Other streets, such as Madison, Franklin, Lincoln and Longfellow, held similar significance for Nelson.

Ruskin, along with others, was influential in forming Nelson's ideas about the importance of aesthetic beauty and moral upliftment in countering the negative impact of industrialization. Nelson believed landscape has a shaping influence on character, and LeClaire was designed as a garden community. Open areas around the factory were planted in grassy lawns and flowerbeds, and a border of Osage orange trees screened the industrial from the residential area.

Nelson actively promoted gardening, setting the example in his own yard. Free plants and flowers, grown in the company's steam-heated greenhouse, were offered to anyone who wanted them, and each year, prizes were awarded to the best gardens. 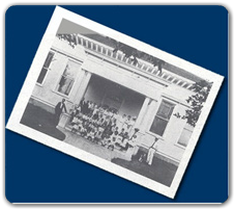 In the mold of Thomas Jefferson, Nelson strongly advocated free education for all, and at The Academy, young people from both the village and nearby Edwardsville attended school free of charge.

Children moved through a three-phase educational system structured by Nelson, beginning with kindergarten. After kindergarten to age twelve, students followed a normal course of instruction. Between the ages of twelve to eighteen, time was divided between classroom instruction in academic subjects and training in manual skills. Boys spent a portion of their days either in the factory or at the cooperative dairy farm on the southern perimeter of the village, while girls were schooled in the domestic arts. Again, Nelson's view of the preeminence of work in life is evident.Adults, too benefited from The Academy, which housed a 2,000 volume library and provided space for public meetings and debates. A speaker series drew people to hear such notable figures as Hull House founder Jane Addams,,business reformer Sam "Golden Rule" Jones, and social reformer Edward Everett Hale.

LeClaire was not a place of all work and no play, and abundant recreational facilities were provided. The sliding walls of The Academy were often pulled back, expanding its four classrooms into a setting for dances, concerts, theatrical productions and magic lantern shows.

Other, more athletic entertainments were available as well. Adjacent to The Academy lay a two-and-a-half acre recreational area with playing fields for baseball and football, courts for tennis, and a structure which housed a bowling alley and a billiards room. Sand was brought in to form a beach at LeClaire Lake for swimmers, and a park area was popular for picnicking. On summer evenings, people gathered around the bandstand on the west shore to listen to concerts.

The Residential Area: The Ideal of Home Ownership

Nelson attributed much of the dissatisfaction among factory workers in the cities to inadequate housing and the hopelessness of home ownership. He determined to place home ownership in LeClaire within reach of all who wanted it. Generous building lots could be had at a fair price - purchased on installment, with payments adjusted to a man's wages and the size of his family.

If a worker desired, the company would build his house for minimal profit over the cost of materials. Should a homeowner later decide to sell his property, the company would buy it back at the original purchase price, less rent for the time occupied. Always mindful of the importance of economic security, Nelson also established a provident fund to protect workers and their families from hardship in case of serious illness, injury or death.

Most of the houses in LeClaire are modest, but attractive, frame structures. Elements of then-popular architectural styles may still be seen throughout the area - Queen Anne, ltalianate, Gothic Revival, Classical - and it is likely that many of these features were mail-ordered from mill catalogs. None of the houses are truly grand or pretentious, however. They are more aptly described as comfortable and workmanlike, qualities which seem consistent with the values Nelson promoted.

A Dream Ahead of Its Time

LeClaire thrived at first under the guiding hand of Nelson, though it never realized the full scope of his expectations. There were families, certainly, which found in LeClaire the better life of which they had dreamed. Others rejected Nelson's values and scorned the life of simple dignity and rationality he offered. It was these who were the source of Nelson's ultimate disappointment and these, perhaps, who prompted the judgment of Nelson's friend, Upton Sinclair: LeClaire was a dream ahead of its time.

A Man of Vision

In the middle years of the 19th century, industrialization began its inevitable spread from Europe to America. Born in 1844, N.0. Nelson was to prove himself a true child of the industrial revolution, although he was born in Norway and grew up in rural northwestern Missouri after immigrating with his family to the United States at the age of two.

In young adulthood, Nelson left the family farm and joined the Union Army. As the Civil War drew to a close, the prospect of a reunified nation opened new potential for industrial and economic development. Determined to seize the opportunity, Nelson headed for St. Louis by then a thriving commercial center.

In an age when vast fortunes were made at the expense of labor, Nelson emerges as an industrialist with a finely tuned conscience. He was exceptionally well read, a man of ideas as well as of action. He was a Unitarian, imbued with strong values regarding the fundamental right of man to live in freedom and dignity.

The National Register of Historic Places

In the 1930's, Leclaire's existence as an independent village ended with the annexation into the City of Edwardsville. To the present time, however, the area retains much of the character and most of the structures of the original development. Residents of the area, recognizing its significance, have organized to preserve its integrity.

In 1979, the Historic Preservation Commission of the City of Edwardsville petitioned the U.S. Department of the Interior for recognition of Leclaire as a historic district on the National Register of Historic Places Inventory. The nomination was approved, and Leclaire moves proudly toward its second century with official acknowledgment of its unique contribution to American history.
Taken from the brochure "Historic Tour of Leclaire Village" published by the Edwardsville Economic Development Commission & Edwardsville Historic Preservation Commission.